Scott Adams: Why Hillary Clinton is awful at marketing


Louisville, KY - Much has been going on lately regarding Ford Motor Company. In a stunning move, Ford announced that they will be moving all small car production to Mexico. This creates many problems and we the people should be demanding answers. Forbes has done an updated article on the bailout money that Ford got and this raises all kinds of interesting questions.

Louisville, KY - We have been the only outlet for well over two years now that have been reporting on the allegations against Ford Motor Company and Mayor Greg Fischer by former Ford employee Jay Morgan. The allegations regard an illegal termination of Jay Morgan by Ford, aided and abetted by our own Mayor Greg Fischer. We have told you and brought to you our evidence as to why we believe it to be so.

Read here for a refresher on some of the previous stories.

Louisville, Ky - Elections have consequences folks and this year is no exception. I have to admit that outside of the Presidential races it is hard to get excited on a local basis. Why? Because we are faced with the same old garbage as usual. We will discuss some of that on the next Ed Springston Show on Monday May 16. There are a couple of interesting races though and the Republican primary in Council District 16 is one of them.

In the interest of fairness I have to point out that I know District 16 Republican candidate Chip Sobel on a personal basis. Make of that what you will, I also know many establishment Republicans on a personal basis including Ken Fleming, Kelly Downard and a whole host of others.

Louisville, KY - Metro Council and zoning are at it again. Once again ignoring their own Cornerstone 20/20 plan. Amazing how they push that plan down our throats when it is convenient for them but ignore it when we hold them accountable as well isn't it?  This Tuesday May 17, they will meet to decide on whether to change the zoning designation at Billtown Rd and the Gene Snyder so it can be developed for commercial use. Once again violating their own agreements. It is time to take a stand Louisville and finally tell these "leaders" we are tired of being ignored.

Make plans to attend and let your voice be heard in person. 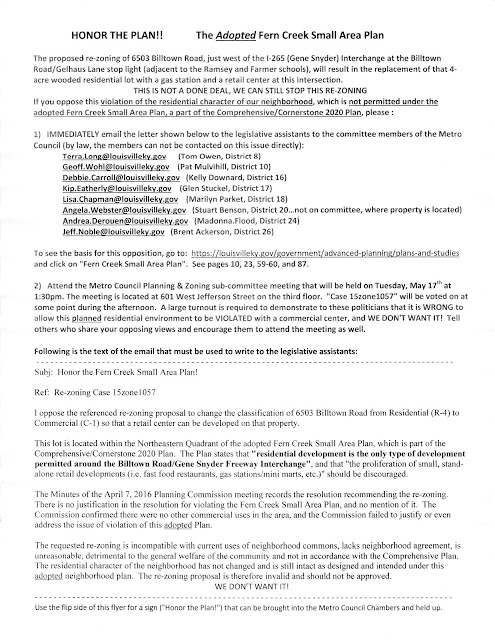 Make plans to attend if at all possible folks.

Listen daily from 7-8pm at The Ed Springston Show. Also visit Louisville Politics for more details and in depth coverage of local political and news issues.

THE UNITED DAUGHTERS OF THE CONFEDERACY

Louisville, Ky - As most of you know by now, I initiated a suit and was granted and injunction on the removal of the confederate statue that Greg Fischer and Jim Ramsey are pretending to care about. Do not pay attention the candidate Everett Corley trying to use this for his own gain. He knew nothing. The issue is a National one with too many people to count at this point wanting to get involved in some way.

Louisville, KY - Over the last 48 hours since an injunction was sought by myself against Mayor Fischer over his illegal attempt to remove the Confederate Monument, there have been hundreds of people locally asking for more information and wanting to join us. The more the merrier.
Additionally, thousands right here at home and across the Country have been paying attention to the renegade Mayor and his attempts to play dictator and have been in contact with us as well.
Read more »
By Ed Springston at May 04, 2016 No comments:

Louisville, KY - As many of you know by now a restraining order was issued this morning on my behalf for an injunction to keep Mayor Fischer and U of L President James Ramsey from illegally removing the confederate monument at the University of Louisville.  There is much confusion on this effort thanks to my allowing current candidate Everett Corley, or Corley Everett depending on which way he is naming himself this week, to be on the request.

He has politicized this in an effort to gain some notoriety or name recognition in his effort to defeat incumbent Rep. John Yarmuth.

Louisville, KY - After being contacted by multiple publishers, who are familiar with my investigations into public corruption, to write a book, I decided a couple of months ago to follow their advice and do so. Though I have not decided on which publisher to go with at this point they, and I, are keenly interested in publicizing corrupt officials and the insider game played between them and Corporate America.


Louisville, KY -  Anyone who watched this so called debate should ask for compensation for wasting their time. I would have expected more from kindergartner's at recess. It was pathetic at best but there were clear signs of desperation from a few candidates mainly Bush, Cruz, and Rubio. For anyone who thinks Trump lost they better think twice....

U of L President Ramsey should be investigated and fired

Louisville, KY - It is far past time that U of L President James Ramsey leaves, voluntarily or involuntarily. He has been a mess for Kentucky since he first started working years ago. In Kentucky, as long as you are a good little Democrat, you get rewarded regardless of who you harm in the process. We are way too familiar with that game and it is time we end it.

Why would I say all that anyway, right?